I had a speaking engagement booked by a speaker’s bureau. This means that the bureau has the relationship with the client and they have booked me to speak at their event. The bureau will earn a commission on my fee, usually 25%. They will handle all of the money and pay me after the presentation.

This one particular bureau is a woman who used to work for me. After leaving my office she started her own bureau. In the past she has had poor money management and used the speaker’s money to pay her bills. Although she handles all of the money the only amount of it that is hers is her commission. Several years ago she stiffed me on a fee. She said she was having hard times and was closing her business.

After several years had passed she made contact with me to tell me she was in the business again and had a booking for me. Although I hesitated, I accepted that booking.

Then it happened again. She collected the deposit and the balance. I flew to Orlando, gave a wonderful program for the client and everyone was totally pleased. When I arrived back home I was told that the check would go out this week. It never did!

I had this handled from a perspective standpoint. I took responsibility. I knew that it was a possibility that this woman would have a problem with spending the speaker’s money. I could have asked her to get her deposit up front and to have the client send the rest of the payment directly to me. In fact, I should have insisted on it.

My further thoughts were that not all people are honest and have integrity and it’s not terrible, horrible and awful when they don’t, it just is. So I thought that I had this handled in a very reasonable way. The cognitive behavioral therapists would have been proud of me.

A couple of nights later however I woke up in a state of high anxiety. I was in a flight or fight high anxiety driven state. My amygdala had just hijacked me.

I unfortunately have a very sad personal example. My brother in law was in a 12 year relationship with a woman. They lived together; he financed her business and made other financial commitments on her behalf.

After their break-up this woman comes to his house with her new boyfriend and starts taking furniture that she rationalizes belonged to her.

Some other famous hijacks;

Let’s take a look at the neurophysiology of the amygdala hijack and then I’ll offer a solution.

An Amygdala Hijack is an immediate and overwhelming emotional response out of proportion to the activating event and independent of logic.  The amygdala is the part of our brain that handles emotions. It is a structure in the limbic area of the brain. During an Amygdala Hijack, the amygdala "hijacks" or shuts down the pre-frontal cortex or PFC.

The PFC includes working memory, judgment, planning, sequencing of activity, abstract reasoning and dividing attention. The prefrontal cortex is involved in impulse control, personality, reactivity to the surroundings and mood.

Ordinarily it is the function of the PFC, prefrontal cortex, to inhibit and direct behavior. This is the part of the brain that will have you do the harder thing.

This is also the seat of willpower. This is your conscious control where you are able to match your behavior with your intentions. When you wake up at 3:50 am and intend to go to the gym for your morning workout, it is the PFC that will stop you from thinking how tired you are and replace that thought with the positive and more compelling thought that every day that you start off with a workout is a better day.

You use the PFC when you plan for your week. This is the logical and reasoning part of the brain. This is how the human species has risen to the top of the food chain. We have the largest frontal lobes of any animal. The frontal lobes are associated with higher-level functions such as self-control, planning, logic and abstract thought.

The amygdalae are a set of structures deep within the brain in the limbic area. There are two of these structures. They are a complex system of nerves and networks involving several areas near the edge of the cortex concerned with instinct and mood. It controls the basic emotions (fear, pleasure, anger) and drives (hunger, sex, dominance, care of offspring).

All of your senses connect directly to the amygdala. When there is a strong activation of the amygdala then the flight or fight instinct occurs and you are instinctively driven into action without any activation in the PFC.

This is a tremendous advantage for survival. The limbic area of the brain is very fast. It is this speed that is necessary for survival. Then non conscious brain is 400 times faster than the conscious brain. It favors survival to have the limbic area of the brain see the picture on the left and be able to react to it as if it is the picture on the right.

The PFC is not activated while caveman sprints as fast as he can. It’s not until several seconds later that the PFC engages and the man realizes that he is running for his life from a tiger that can kill him.

Ordinarily we have cortical-limbic loops. This means that we modulate the emotions with our PFC. However, the PFC is very energy intensive and we can’t maintain activity in this area for a prolonged period of time.

There are many examples of the amygdala getting overwhelming activation and controlling your behavior without the modulating influence of the PFC. This is what I am referring to as amygdala hijack!

There are several solutions that will shut down the amygdala hijack. All of them have to do with emotional regulation through rational thinking or what is referred to as cognitive behavioral therapy. This is a reappraisal of the situation in such a way that is not a catastrophic, terrible, horrible and awful experience.

What is important here is to realize that we must take responsibility for the meaning that we give to the events that occur in our life. Events are neutral until we make up a story about them and give them meaning.  We don’t have to believe our story or hold it as being true. We can give it a new narrative, one that is less emotional.

Another intervention is what is called grateful flow. This works wonders.

Imagine an activating event. The bureau doesn’t pay me for a speaking engagement. My brother in law’s ex-girlfriend and her new boyfriend are taking his belongings out of his house. You’re stuck in traffic, you name it. Pick an irritant that has happened to you.

Next apply grateful flow. The first part of grateful flow is acceptance. This doesn’t mean that you are passive and allow yourself to be taken advantage of. It just means that you don’t do double duty. Not only did the event occur and you are also upset about it.

Acceptance means that you stop resisting. It’s like pushing a beach ball under the water. The beach ball will constantly rise back up to the top. When you attempt to suppress a thought or feeling it also magnifies and pops back up even stronger. Your resistance magnifies what is being resisted.

So the next time just accept that some people are….fill in the blanks. Or not all people are honest, or do what they promise, have integrity etc.

Once you have acknowledged and accepted the feelings then allow yourself to think about what you are grateful for. Focus on that. What you focus on expands. This type of thought focus will part the dark clouds and give you direct access to the great sunshine that is above. Now you’ll have access to the best version of yourself. 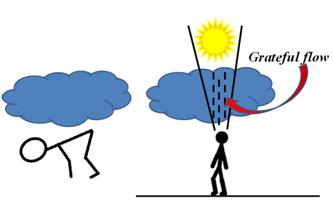 When I woke up that night with all of that anxiety I realized that my previous perceptual control was wearing thin. I immediately went into grateful flow and it stopped the anxiety. I just thought about all of the things that I was grateful for, my health, my family, my career, my friends, the weather, the list is never ending.

What did this was the PFC. It works in opposition to the amygdala. There are other positive activations in the brain caused by grateful flow but I’ll keep it simple.

I wish I would have had the insight to teach my brother in law how to emotionally regulate. If he could have responded differently he would still be alive today.

Use grateful flow and watch the hijack end immediately!