What is your most probable predicable future? How do you make sure it is not more of the same? There is a law in nature that states matter is either in a state of growth or decay and there is no middle ground. The same can be said for human beings. You and I are either getting better or we’re getting worse, there is no staying the same.

It’s interesting that the flow of time is always forward and each moment is just that, a moment that is already gone! 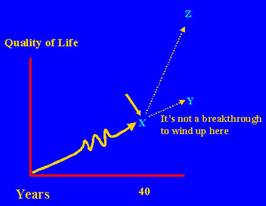 This graph represents your most probable certain future.

You start off in life with an upward trend over time. Things are going just fine. You are learning, growing, getting an education or a job and maturing. There are some struggles but you move through the ups and downs generally coming out as a better person. If you chart this at forty years old, (X), over the next ten years you can expect to wind up at (Y), representing more, better, different and again, improved.

Let’s look at this from a different perspective. Let’s examine the issue of probability. Years ago there was a popular T.V. game show called “Let’s Make A Deal”. The host of the show, Monty Hall, would show three doors with a wonderful prize such as a car behind one of the doors. After the contestant chose a door, Monty Hall would open a different door, revealing a joke prize that the contestant would be thrilled that they did not pick. A joke prize might be a live donkey for example.

You chose Door 1. Monty then says, “let’s show you what’s behind door number 3”, and of course a beautiful woman is holding a rope on the donkey and Monty is quick to point out that the prize is the donkey, not the woman. That’s what you didn’t win.

Next Monty gives you a choice. Do you want to keep to your original choice or change your mind and select door number 2 in the hopes of winning the new car?

The audience cheers and shouts out their opinion as the contestant is in agony. What would you do? What is the probability that you have correctly chosen the door that has the car? Most people would look at this and think that you have a 50-50 chance of being correct if you stay with your original choice or if you change to door number 2. This is not correct.

This is a lesson in thinking and altering perspectives. Take this a step further to expand your thinking. Imagine that there were 6 doors and you selected door number 1. After the choice is made, Monty hall reveals the unwanted prizes behind 4 of the doors, leaving only yours and one other. Do you still believe that there is an equal chance that the door is behind one of the remaining two doors, or, has your intuition about the situation been changed?

A method of thinking being used here is to exaggerate the potential outcomes. Suppose we exaggerate the situation to 100 doors or even 1 billion and Monty opens all but two of them after you have made a choice. Should you switch doors or stay with your original choice?

At this point, you are probably thinking about switching. What is the chance that you correctly selected the door with the car with 1 billion doors? You have a 1 over one billion chance of being correct. From that perspective would you change your choice?

This problem has stumped many people including mathematicians. It’s an example of a few peak performance principles. First, the law of large numbers is being used through exaggerating the problem. Exaggeration enables you to see trends and make most probable predictions. It is then easier to return to your current situation with a new perspective.

This problem also shows you that you can’t trust what you see and how you instinctively think. Your gut is going to tell you that there is a 50-50 chance of having selected the right door with your first guess. Probability theory disagrees.

It’s not too much of a stretch to apply this to the bigger picture of your life. You want an exciting life filled with love and abundance. The question is should you stay the same, continue on with the same habits and routine as you currently have now, or should you make a dramatic change? It appears most certain that unless you make a dramatic shift in your thoughts, actions, routines, habits, then you will wind up with the most probable certain future of more, different, better, but simply another version of the same.

In order to have an outrageously exciting, abundant and successful life, the most certain move would be for you to change! Now the assignment is to examine your life and to decide what needs to be changed. Good luck!